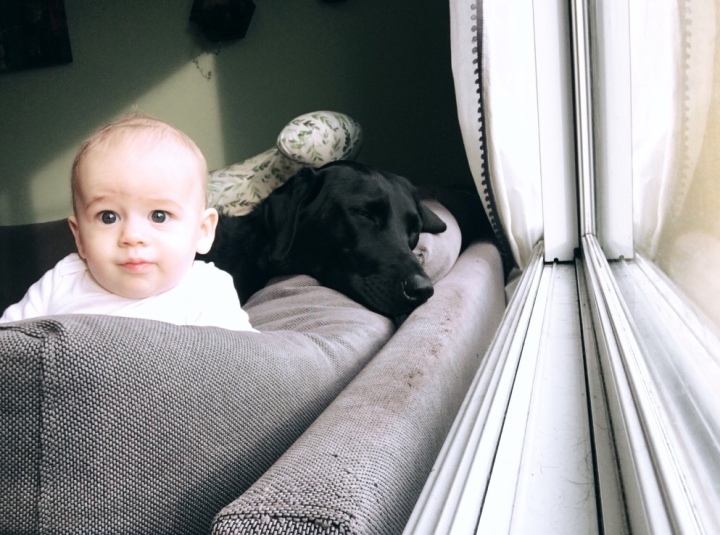 As a new mom this phrase, I said I’d never but, I already have, speaks to me. I’ve just barely dipped my toes in this motherhood journey & I’ve already quickly realized that you can have all these grandiose ideas about parenthood & how you plan to raise your babies & sometimes you have to throw things out the window.

“I said I’d never but I already have” pretty much encompasses how our first week of parenting went. We never planned to formula feed. We had mixed feelings on introducing pacifiers, we certainly never anticipated spending time in the NICU . In some ways I’m thankful that our journey forced us to toss our plans out the window & just move forward.

One of my biggest I said I never woulds – the Google machine. As an ER nurse I know googling random medical questions is a cardinal NO NO. In fact it’s one of the fastest ways to get an eyeroll in an emergency room. As a new mom I found myself struggling to fall back asleep after Will’s 5am feeding, knowing he’d be awake again in 90 minutes. So, I unhealthily spent most of that early morning time on Google: wondering if his baby acne was something more, if his head looked too flat, if I should worry that he favors looking to one side and on and on. Every nurse bone in my body would yell at me to stop! Usually by day break I would have talked myself down… Once William started sleeping through the night I found myself not doing it quite as much but every once and awhile I’ll find myself scrolling through a mom forum discussing things that I know I don’t need to worry about it typing something absurd into Google!

I think motherhood is all about walking this line of sticking to your guns but also making concessions on things when it’s what is needed. We weren’t super into the idea of pacifiers, but in the NICU they use them all the time for the babies, especially during procedures. I wasn’t about to sent him some of that comfort because of what I’d been told in a breastfeeding class. So our “no pacifiers” went straight out the window. And guess what? Life moved on. He continued to breastfeed without issue despite what lactation consultants would tell us and ironically at nearly 7 months William has little to no interest in pacifiers

What are some concessions you had made early on in motherhood? What are other things that you don’t budge on?

I know there will be more. Probably today. We’re leaving this morning for Miami & then tomorrow we’re heading to the Caribbean for a week. Wish us luck.

Life currently feels like it’s moving at warp speed but simultaneously each day feels like a week. It’s somehow been 10 weeks of shelter in place. Last weekend I was off by one week of how pregnant I am. And apparently Monday is Memorial Day? Trying to find peace in quiet moments like solo sunset walks with my girl. She’s back to the vet today for ongoing tummy issues & making sure there isn’t an obstruction. It’s so easy to feel sad about her downturn in health but trying to just be grateful we’ve gotten to spend the last 10 weeks loving on her 💗 . . . . . . . #quietmoment #momentofzen #goodmorning #sunset #sunrise #beautifuldayintheneighborhood #myhood #innerrichmond #quarantinechronicles
32 weeks today, and suddenly the countdown feels very real. Making lists, sorting things I saved from Will & trying not to low key panic that a baby is gonna be here before we know it!! . . #32weekspregnant #32weeks #pregnancy #fitpregnancyjourney #fitpregnant #thirdtrimesterproblems #countdowntobaby #amazonfashionfinds #maternitystyle #ootd #summerbaby
Five years. This moment simultaneously feels like a blink of an eye & a lifetime. But I wouldn’t want to be on this ride with anyone else @chrisjdorsey - you’re an amazing father, my favorite conversation, a competitive card player, a bomb breakfast cook & my ultimate rock. Cheers to 5 more years of belly laughs, silently mouthing “wtf” to one another about our kids, late nights of cards & wine.
Perhaps this is what this season is all about: trusting in the unknowns, finding gold in the little things, trading fear of what’s uncertain for freedom to thrive within it. - Morgan Harper Nichols . . . #findgold #findthelight #quotes #beautifulday #walkoutside #capoppies #poppy #trails #ggpark #sf
To the girl who set health & fitness goals in January & hasn’t seen any changes. • Who starts again every Monday, promising this week will be different. Only to lose steam & give into cravings come Friday night. • To the girl who searches Pinterest for “healthy dinner ideas” or “at home workouts” • I SEE YOU. I was you. • I talked about motivation on my stories the other day. The truth being I rarely have “motivation” to workout. But I’ve committed to this lifestyle of showing up for myself 30 min a day. I know it makes me a healthier, happier, calmer mom, wife, friend, coworker. Pouring into myself at the beginning of the day let’s whatever else happen that day feel manageable. • One day I woke up and decided I was done breaking promises I made to myself. And that discipline is what keeps me waking up at 6am to work out 4-5 times a week. Do I always want to push snooze and stay in bed? OF COURSE. Do I regret the mornings I get up early & push play? NEVER! • 2020 has thrown most of our daily routines out of wack. We are nearly half way through the year - if you made goals back in January & are struggling to achieve them, join me! Let’s meet our goals together! Don’t let another month slip away!
Shared all the photos from William's Two The Moon birthday on my blog 🌙 . . . . #twothemoon #twothemoonparty #secondbirthday #babyboyparty #toddlerbirthday #diybirthdaydecor #birthdayideasforhim #glutenfreebaking #glutenfreebirthdaycake #boymama #diymom