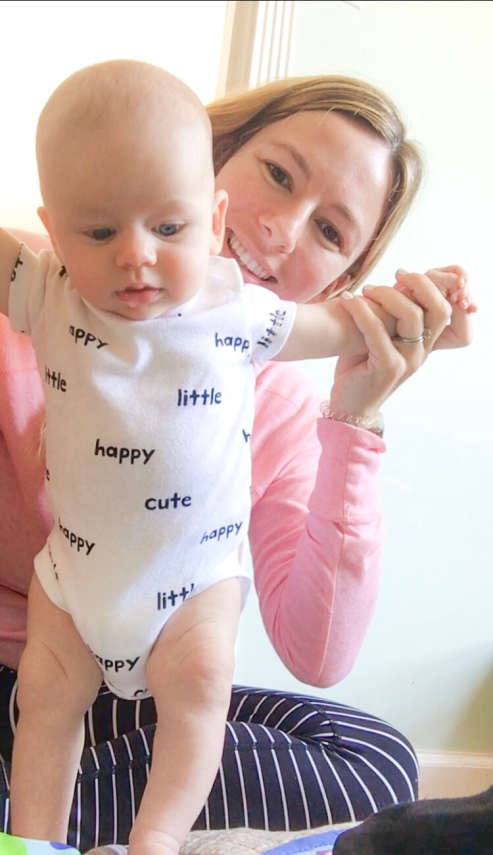 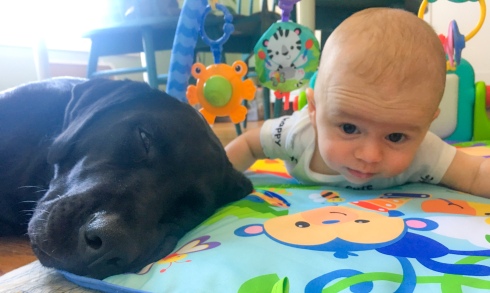 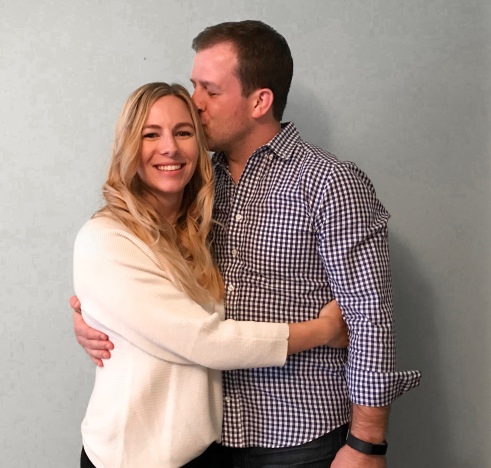 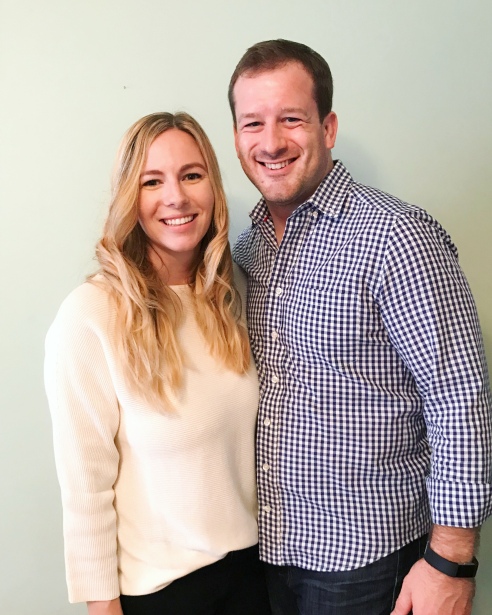 I finished week 3 of BBG last week & I’m LOVING it! I’m so excited to start week 4 tomorrow.  I’m doing the program with two friends & it’s so much easier when you have other people keeping you on track. We don’t do the actual workouts together, but we keep one another motivated with a group chat.

This pumping bra is awesome! I ordered it on amazon & highly recommend it. So if you’re a new momma & are looking for a great & cheap pumping bra check this one out.

This weekend we took William out to brunch & he did so well, he was just sitting on Chris’ lap just taking it all in & then decided he’d spend the second half of brunch snoozing.

Chris & I started watching The Crown on Netflix & it’s SO good. I wasn’t sure if I would like it but the show is really well done. We realized we knew very little about the Royal Family at the start of the series & each episode we end up googling something that comes up.

We got William a little activity seat (it’s what he’s sitting in on in the first photo) & he looks SO big to me! He’s still a little small for the seat & doesn’t love it right now, but when he’s in there holding his head up he already looks so grown up!

I’m starting to plan out my work schedule when I return & even though I’m not going back to work until mid September, I have to submit my requests for my schedule at the end of this month & it makes it feel closer than it is. It’s so bittersweet thinking about having to go back to work. It makes me so sad to think about leaving William for 11 hours at time but I’m admittedly getting a little stir crazy being at home with not much on the calendar

Chris & I went on a date this weekend, we went out to dinner & to a Bob Schneider concert. It felt so nice to get out for a few hours.

Below are some of the workout songs I’ve been loving. I usually listen to “Firestone” station on Pandora & then I get ideas for what to put on my Spotify playlist.

hope everyone has a great week!

Life currently feels like it’s moving at warp speed but simultaneously each day feels like a week. It’s somehow been 10 weeks of shelter in place. Last weekend I was off by one week of how pregnant I am. And apparently Monday is Memorial Day? Trying to find peace in quiet moments like solo sunset walks with my girl. She’s back to the vet today for ongoing tummy issues & making sure there isn’t an obstruction. It’s so easy to feel sad about her downturn in health but trying to just be grateful we’ve gotten to spend the last 10 weeks loving on her 💗 . . . . . . . #quietmoment #momentofzen #goodmorning #sunset #sunrise #beautifuldayintheneighborhood #myhood #innerrichmond #quarantinechronicles
32 weeks today, and suddenly the countdown feels very real. Making lists, sorting things I saved from Will & trying not to low key panic that a baby is gonna be here before we know it!! . . #32weekspregnant #32weeks #pregnancy #fitpregnancyjourney #fitpregnant #thirdtrimesterproblems #countdowntobaby #amazonfashionfinds #maternitystyle #ootd #summerbaby
Five years. This moment simultaneously feels like a blink of an eye & a lifetime. But I wouldn’t want to be on this ride with anyone else @chrisjdorsey - you’re an amazing father, my favorite conversation, a competitive card player, a bomb breakfast cook & my ultimate rock. Cheers to 5 more years of belly laughs, silently mouthing “wtf” to one another about our kids, late nights of cards & wine.
Perhaps this is what this season is all about: trusting in the unknowns, finding gold in the little things, trading fear of what’s uncertain for freedom to thrive within it. - Morgan Harper Nichols . . . #findgold #findthelight #quotes #beautifulday #walkoutside #capoppies #poppy #trails #ggpark #sf
To the girl who set health & fitness goals in January & hasn’t seen any changes. • Who starts again every Monday, promising this week will be different. Only to lose steam & give into cravings come Friday night. • To the girl who searches Pinterest for “healthy dinner ideas” or “at home workouts” • I SEE YOU. I was you. • I talked about motivation on my stories the other day. The truth being I rarely have “motivation” to workout. But I’ve committed to this lifestyle of showing up for myself 30 min a day. I know it makes me a healthier, happier, calmer mom, wife, friend, coworker. Pouring into myself at the beginning of the day let’s whatever else happen that day feel manageable. • One day I woke up and decided I was done breaking promises I made to myself. And that discipline is what keeps me waking up at 6am to work out 4-5 times a week. Do I always want to push snooze and stay in bed? OF COURSE. Do I regret the mornings I get up early & push play? NEVER! • 2020 has thrown most of our daily routines out of wack. We are nearly half way through the year - if you made goals back in January & are struggling to achieve them, join me! Let’s meet our goals together! Don’t let another month slip away!
Shared all the photos from William's Two The Moon birthday on my blog 🌙 . . . . #twothemoon #twothemoonparty #secondbirthday #babyboyparty #toddlerbirthday #diybirthdaydecor #birthdayideasforhim #glutenfreebaking #glutenfreebirthdaycake #boymama #diymom